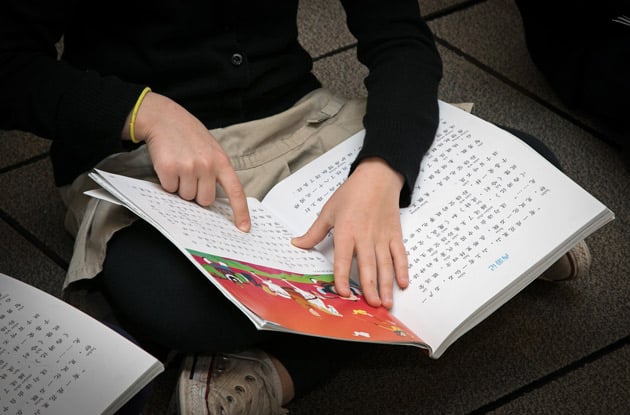 The Benefits of a Bilingual, Immersion Education

Get the Best Kid-Friendly Activities

Sent to You Weekly!

The amount of time spent talking and learning in a language directly correlates to students’ proficiency in that language. Because all subjects are taught in the target language at an immersion school and the students are likely only speaking English at home, they develop higher levels of bilingualism and biliteracy, Ha says. And once a second language is learned, it’s easier to learn a third and fourth.

Related to enhanced critical thinking, children in immersion programs are “able to think out-side the box and think creatively because their minds are used to working in different directions,” Huang says. Bilingual students are more inclined to see “that it’s not one size fits all,” Ha adds. For example, Huang says, if you ask a monolingual student for different uses of a paperclip, he may give 10 answers; if you ask a bilingual student the same question, she may give 20 answers.

With Mandarin immersion, in particular, math and numbers are very systematic. For example, the numbers go from one to 10, then 11 is 10+1, 12 is 10+2, 13 is 10+3, and so on, Huang explains. “This enables kids to latch on to addition, subtraction, multiplication, and division very easily,” she says.

Expanded Knowledge of and Empathy for Other Cultures

In an immersive education, students aren’t just developing a high language proficiency and academic intellectual capacities, according to Ha. “Through language, they’re learning culture, and they're learning about various people groups of that language,” she says. “As they learn the language and the culture, they are developing the skills of empathy of looking at things from different perspectives and allowing themselves to really experience that culture.”

Huang cites an experiment in which children were separated into three groups: a white, English-speaking group, a mix of white and Hispanic children, and a mix of white and Hispanic children with the white children actively learning Spanish. “Only in that third group did the white children have positive thoughts about Hispanic children,” Huang says. “I think that experiment and the results from it are very powerful in explaining why learning language is so important for children. It changes how they view another race, and in today’s culture, I think that’s more important than ever.”

There are many stores, activities and attractions at American Dream in NJ for families and kids to enjoy.

SPONSORED CONTENT: The American Dream Daycation: Forgo the Flight and Spend A Fantasy Day at This Local Wonderland!

Forgo the flight and spend a fantasy day at this American Dream, just five miles from NYC in East Rutherford, NJ.